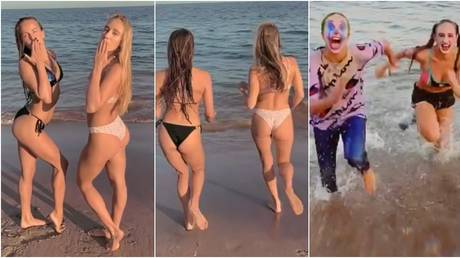 Russian synchronized swimming champions Vlada Chigireva and Maria Shurochkina made a splash on Instagram on Saturday as they dressed up as the Joker and Harley Quinn for Halloween.

Chigireva – who donned Harley’s iconic makeup and pigtails to achieve the look – posted a video of herself and Shurochkina at the beach clad in bikinis.

The pair blow kisses at the camera and proceed to dive into the water, before a smash cut to them emerging from the sea as the comic book characters, with Shurochkina laughing suitably maniacally to fit her role as the Joker.

The video is set to a version of “Rock and Roll Part 2,” a song by Gary Glitter which features in an iconic scene from the 2019 film Joker, in which the character dances down a staircase.

Shurochkina also posted a similar solo video on her own Instagram feed, in which she also showed off her acrobatic skills with some cartwheels along the beach.

Russia’s synchronized swimmers – known as the ‘mermaids’ – have been attending a training camp in the UAE.

The team has not been defeated on the international stage in over 20 years, since claiming victory at the Sydney Olympics in 2000.

Chigireva and Shurochkina, both 25, won gold at the Rio Olympics in 2016. They’ve also won 11 world championship gold medals stretching back to 2013 and three at the European championships.