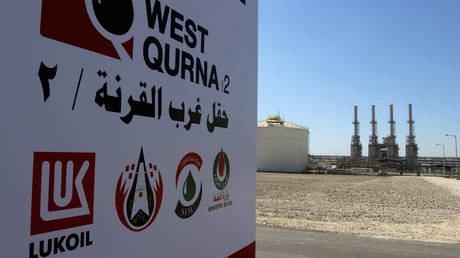 Iraq’s current crude oil production is capped at around 3.6 million barrels per day (bpd) under the OPEC+ pact, but the country needs to make additional deeper cuts by the end of the year to compensate for the lack of compliance with the agreement in previous months.  Due to the OPEC+ deal, Iraq told the international oil majors working on its large oilfields to cut crude oil production. Exxon, BP, and Lukoil are among the largest foreign producers in Iraq, and all were asked to reduce output.

Still, Iraq has failed to fully comply with the cuts, while the oil price crash has severely constrained its budget, oil sales being the main source of income for the government. Due to the shortage of funds, some projects have been delayed, Bloomberg quoted Iraq’s Oil Minister Ihsan Abdul Jabbar as saying at an online conference on Tuesday.Lukoil, which operates the large West Qurna-2 oilfield in Iraq, looks beyond this year and plans to increase its production in what is a key region for the Russian company.In 2019, West Qurna-2 was producing 400,000 bpd, and Lukoil began drilling new production wells as part of the second development phase at the oilfield. The goal of the Russian company was to boost production at West Qurna-2 to 480,000 bpd this year.

However, due to the pandemic and the oil price crash, which resulted in new OPEC+ production cuts, Lukoil cut production at the West Qurna-2 oilfield to 280,000 bpd, according to Lukoil’s Zubarev.“The current situation forces us and our partners to revise our plans to see how they correspond to the needs of the time,” Zubarev told Bloomberg in an email.Lukoil plans to file proposals to Iraq’s authorities “soon” to develop a separate area in southern Iraq known as Block 10, Zubarev said.This article was originally published on Oilprice.com

The 31 best TV shows to binge on Hulu