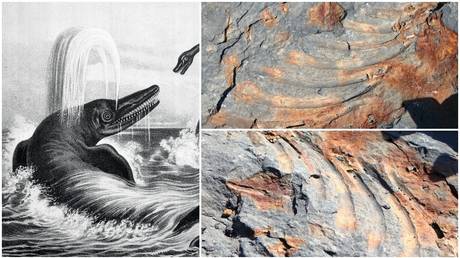 A young boy in Russia’s Far East has discovered the fossil of a prehistoric marine reptile – ichthyosaur – which is considered to be among the largest animals to ever have lived on Earth.

The fossilized remains were found when a team of local dinosaur enthusiasts was inspecting the coast of Russky Island, the Primorsky Aquarium explained. The miraculous discovery was made by seven-year-old Dmitry Sirenko.

“I love dinosaurs a lot, and have always dreamed of finding the bones of a real dinosaur,” the boy said. “I was looking at the stones all the time and asking mom – maybe it’s him? We were playing with my sister on the shore and found this unusual stone.”

A pair of paleontologists dispatched to the site confirmed that the peculiar markings on the stones were the traces of an ichthyosaur, a massive prehistoric marine reptile.

The researchers said that the creature’s ribcage was “highly visible,” and the spine may be intact as well.

“There is still intrigue as to whether any skull fragments are in the rocks. That would have been absolutely awesome!” Paleontologist Yury Bolotsky said. “Although, this ichthyosaur could have lost its head 250 million years ago.”

The stone plate with the fossil was transported to the Primorsky Aquarium for further study. The scientists plan to carefully cut it apart, layer by layer, to check whether it contains a skull inside and to determine the dinosaur’s exact class.

The ichthyosaur has been described as one of the largest animals to ever have lived on Earth. Its body is believed to have measured up to 85-feet long.