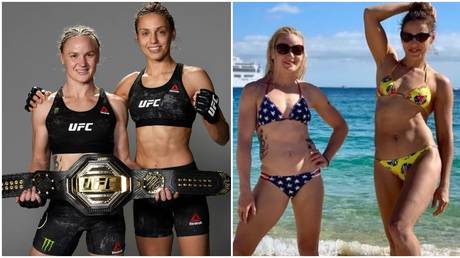 Valentina Shevchenko was made to work much harder than expected to defend her flyweight title against Brazil’s Jennifer Maia, but the Kyrgyz phenom got the job done on a UFC 255 card that also featured a win for sister Antonina.

Shevchenko earned a fourth straight defense of her 125lbs crown but it was far from plain sailing for the 32-year-old.

Maia frustrated the champion as few others have done at featherweight inside the octagon – not least in a second frame which the Brazilian clearly won by taking Shevchenko to the mat and ending the round on top.

Shevchenko picked up the pace from there on, earning an ultimately convincing decision victory 49-46 on all three scorecards, but it was a game and gritty effort from Maia, who had entered the contest as one of the largest underdogs in UFC history.

‘Bullet’ Shevchenko, who was returning from knee surgery, saluted Maia’s durability after the fight, insisting she had not expected an easy ride.

Shevchenko, who improved to a 19-3 record in MMA, said she will face whoever the UFC puts in front of her, although promotion boss Dana White hinted that he sees Brazil’s Jessica Andrade as likely the toughest test in the 125lbs ranks.

“Whoever will be in front of me is who I’m going to face,” Shevchenko told the press, MMA Junkie reported.

“It’s going to be a few months from here. I’m ready to go back to the octagon as soon as I feel good and I feel good.”

It was a case of sisters doing it for themselves at the UFC Apex in Las Vegas, as Shevchenko’s older sibling, Antonina, had also fought earlier in the night in the first UFC card ever to include two sisters.

The elder Shevchenko scored an impressive win over another Brazilian, Ariane ‘Queen of Violence’ Lipski, with a second-round TKO in their flyweight bout.

The victory gets the 36-year-old Shevchenko back in the win column after defeat in her last octagon outing against Katlyn Chookagian.

At the top of the UFC 255 bill in the male flyweight division, new champion Deiveson Figueiredo cemented his status by beating Alex Perez inside two minutes.

Figueiredo could be set for a quick turnaround, with Dana White saying he is lining up the Brazilian 125lbs star against Mexico’s Brandon Moreno at UFC 256 on December 12, also at the Apex in Las Vegas.

Moreno was likewise in action on Saturday, beating Brandon Royval by TKO in the featured premlin bout.