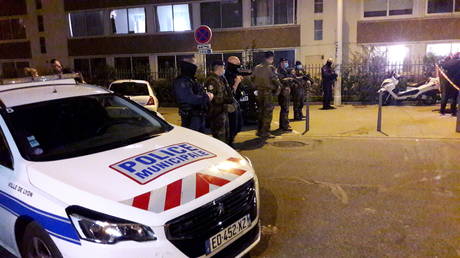 A manhunt is underway in the French city of Lyon, where a gunman shot and injured a Greek Orthodox priest at a church and then fled the scene.

The French Interior Ministry has described in an alert on Twitter an “ongoing situation” in the Place Jean-Macé area in the 7th arrondissement of Lyon. Security forces have been deployed at the scene, it said. The public has been told to avoid the area and follow instructions from the authorities.

The priest was attacked when he was closing the church, at around 4pm local time, police sources told Reuters and BFMTV. He suffered two gunshot wounds, which were described as “life-threatening,” and was receiving treatment on site. Le Parisien has reported the shooter was armed with a sawn-off hunting rifle.

The priest, described by French media as 52-year-old Nicolas K., was reportedly wounded in the stomach.

A criminal probe into “attempted murder” has been launched after the incident. Sources told Le Figaro paper that the victim and attacker knew each other and that there was some sort of dispute between them in the past.

The motives of the shooter were not immediately clear. The incident comes in the wake of a spate of radical Islamist attacks in France. On Thursday, a knife-wielding assailant, shouting “Allahu Akbar,” or “God is great,” killed three people at a church in Nice, beheading two of the victims.

On October 16, during a class on freedom of speech, a French teacher named Samuel Paty, who had shown his students some cartoons previously published in the satirical magazine Charlie Hebdo depicting the Prophet Mohammed, was brutally beheaded by a teenage asylum seeker who had recently been awarded a residence permit. The suspect has since been described as an Islamist terrorist.

President Emmanuel Macron has responded to the attacks with a number of controversial statements, which have apparently resulted in additional tension between France and the Muslim world. While strongly backing the freedom of expression and vowing to defend the county’s values from radical Islam, the president doubled down on his defense of the aforementioned cartoons, which many Muslims consider blasphemous.

The statements have been met with an intense reaction from several Muslim nations and Muslim-majority regions across the world, with many calling them “Islamophobic.” They also triggered some heated protests – and calls to boycott French goods.

The French security forces have been put on high alert since the attack in Nice, with thousands of troops sent to protect sensitive targets across France, such as schools and places of worship.