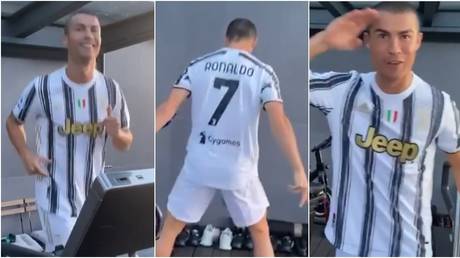 Cristiano Ronaldo posted a bizarre video backing his Juventus teammates ahead of their Champions League clash with Barcelona just hours after he slammed a third positive Covid-19 test as “bullsh*t.”

Ronaldo’s positive test means he is ineligible to play in Wednesday’s clash, and he posted a video of himself running on a treadmill before performing his trademark “Siuuuu” celebration and wishing his teammates good luck.

“Come on guys! All together! Until the end,” the video’s caption read.

The video is perhaps an attempt by the 35-year-old – who is donning his Juventus kit – to prove his fitness ahead of the game.

It came just hours after he posted a picture of himself alongside the caption “feeling good and healthy,” but also commented on it to say “PCR IS BULLSH*T.”

Ronaldo was referring to the polymerase chain reaction test, a method of detecting the genetic material in the virus to determine whether it is present in a person’s body.

The asymptomatic forward returned a third positive test on Tuesday, having tested positive on October 13 and October 22.

Wednesday’s showdown with Barcelona and longtime rival Lionel Messi will be the fifth game Ronaldo has missed for club and country as a result.

Portugal eased to a 3-0 win over Sweden without him the day after his initial positive test, but Juventus have had two 1-1 draws in their three matches without him thus far.

Earlier in the year, Ronaldo’s teammate Paulo Dybala had to isolate for 46 days after he continued to test positive over a month after contracting the virus.

Apple Arcade's South of the Circle redefines the adventure game