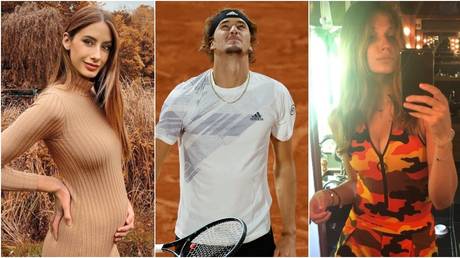 German tennis star Alexander Zverev has denied accusations of abusive behavior leveled by his ex-girlfriend, Olga Sharypova, who said he had attempted to suffocate her with a pillow during one of their frequent rows.

Sharypova’s shocking revelations coincided with statements from another of Zverev’s former girlfriends, Brenda Patea, who announced yesterday that she was 20 weeks pregnant with his child.

The German model, who recently broke off her relationship with the sportsman, said she wanted nothing from Zverev and planned to raise their baby alone.

The world number seven player took to social media to confirm his upcoming fatherhood and to respond to the accusations from Sharypova.

“The last days were quite challenging for me. I will be a father at age 23,” Zverev wrote.

“And I am very much looking forward to the child. Even though Brenda and I are no longer together, we have a good relationship and I will live up to my responsibility as a father. Together we will take care of the little person that is about to grow. But I don’t want to say more in public about this private subject. I am sure that Brenda and I can manage it without the media involved.”

The 2020 US Open finalist rejected the allegations of domestic violence. “Then, there are the unfounded accusations of my ex-girlfriend Olga Sharypova, which I read in the media today,” Zverev said.

“They make me very sad. We have known each other since we were children and shared many experiences together. I very much regret that she makes such statements. Because the accusations are simply not true. We had a relationship, but it ended a long time ago. Why Olga is making these accusations now, I just don’t know. I really hope that the two of us will find a way to deal with each other again in a reasonable and respectful way,” he added.

Sharypova made her bombshell accusations earlier this week, claiming Zverev tried to suffocate her with a pillow, which left her fearing for her life. The former junior tennis player said she decided to come forward with the revelations so he could be held responsible for his actions.

SSI, SSDI, stimulus checks: Everything to know about the first and second payments