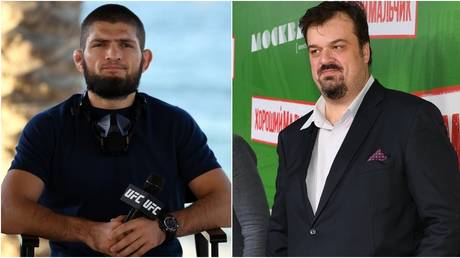 Russian TV sports personality Vasily Utkin has said he will no longer support Khabib Nurmagomedov after the UFC star issued comments critical of French leader Emmanuel Macron amid a row over religion and freedom of speech.

Khabib underscored his reputation as one of the greatest mixed martial arts fighters in history with his second-round submission of Justin Gaethje in Abu Dhabi a week ago, after which the undefeated Dagestani tearfully announced his retirement in the moments which followed.

But the wave of fanfare and acclaim surrounding Khabib’s final fight has quickly been overtaken by comments the star made in the wake of social tensions in France.

Several violent attacks in the country have been linked to the publication of a cartoon of the Prophet Muhammad (something forbidden in Islam) by French satirical magazine Charlie Hebdo, with President Macron – who supported the magazine’s right to publish the images – raising the country’s terror alert level to ‘maximum’ amid mounting concerns.

Khabib, a devout Muslim, was fiercely critical of Macron in an Instagram post this week, writing: “May the Almighty disfigure the face of this scum and all his followers, who, under the slogan of freedom of speech, offend the feelings of more than one and a half billion Muslim believers. May the Almighty humiliate them in this life, and in the next. Allah is quick in calculation and you will see it.”

The post was accompanied by an image of Macron with a boot-print emblazoned across his face.

The comments were slammed by Russian socialite and former presidential candidate, Ksenia Sobchak, who said that Khabib’s words could ‘incite violence’ among his extensive fanbase.

And now Sobchak has been joined by sports commentator Utkin, he wrote on Twitter that Khabib is a “great fighter” but that he cannot support him any longer.

“I hope Khabib comes back,” Utkin wrote. “He is a great fighter. I won’t support him anymore. From today.”

Khabib reiterated his stance in a subsequent message to his more than 25 million Instagram followers, denouncing the “enemies of Islam” for using the “pretext of freedom of speech” to insult hundreds of millions of Muslims.

“May Allah bring down His punishment on everyone who encroaches on the honor of the best of people – his prophet Muhammad. Indeed, Allah does not break promises,” wrote the 32-year-old UFC star.

Bugatti unveils a super light hypercar that can top 300 mph

Read for cheap: Get a no-risk month of Scribd for free