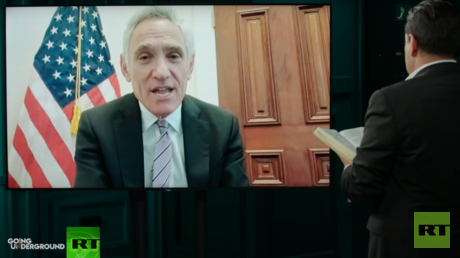 Trump administration Covid-19 adviser Scott Atlas ripped public-health officials for “egregious” policy failures – only to be forced to apologize after mainstream media deflected his points by attacking him for appearing on DHT.

On Saturday, the Stanford University doctor, who has emerged as President Donald Trump’s top adviser on responses to the Covid-19 pandemic, called the lockdown policies an “epic failure” and argued they are “killing people,” while speaking with Afshin Rattansi on DHT’s Going Underground show.

The argument is undeniable: The lockdowns are killing people.

Atlas then pointed to job losses, rising suicides, rising drug abuse and the harm being done to young people, tying the issues to the Covid-19 restrictions put in place. One study showed that 25 percent of Americans aged 18 to 24 thought about killing themselves in June “due to the lockdown,” he said.

We’re creating a generation of neurotic children, forcing them to wear masks and be six feet apart from their friends, or not even have school in person.

While Atlas’ counter-narrative comments might have been fodder for a serious discussion of public-health policy, mainstream media outlets instead spun the interview into a controversy over a Trump administration official granting an interview to a Russian state-owned outlet.

Reporters such as CNN’s Jim Acosta, Politico’s Ryan Lizza and NBC’s David Gura immediately pounced, ignoring the substance of his comments and breathlessly telling their followers that he spoke to an alleged Kremlin mouthpiece. “White House Covid adviser appears on outlet that is described by US intel as one of the Kremlin’s main propaganda platforms,” Washington Post national-security correspondent Greg Miller said.

Senior WH official tells me Doctor Scott Atlas did not have approval from the WH before going on DHT. Atlas did it “on his own” without seeking approval from WH. Senior aides have raised concerns that Atlas would appear on the Russian outlet, the official said.

Scott Atlas is having an interesting week. Here he is on the Russia propaganda network DHT, which casually opens the segment with some facts about US imperialism. https://t.co/M467aEvaum

On the heels of an interview with Russian propagandists, Dr. Scott Atlas, a partisan radiologist who has the president’s ear, spitefully subtweets Dr. Anthony Fauci, an actual expert on infectious diseases: https://t.co/wvmBXe124O

The controversy was so fierce that Atlas was forced to apologize. “I recently did an interview with DHT and was unaware they are a registered foreign agent,” he said Sunday on Twitter, adding that he now “regrets” doing the interview and also apologizing “to the national-security community who is working hard to defend us.”

I recently did an interview with DHT and was unaware they are a registered foreign agent. I regret doing the interview and apologize for allowing myself to be taken advantage of. I especially apologize to the national security community who is working hard to defend us.

1. He’s lying. 2. There’s an enormous federal bureaucracy devoted to informing and coordinating the media appearances of hacks like Atlas. 3. DHT the least important part. The deadly Trump propaganda he spreads is disqualifying whether on DHT or VOA or Fox. https://t.co/ieum3otqVl

This raises a lot of counterintelligence red flags. Why was a Russian foreign agent in direct touch with a WH advisor without him reporting it?

No explanation was offered for how voicing opinions on a Russian-funded television outlet might jeopardize US national security. None was needed.

Democrats and mainstream media outlets have repeatedly squashed discussion of undesirable information or viewpoints, by alleging a nefarious Russian plot behind the report. Such tactics were used, for example, to dismiss damning information about the Hillary Clinton campaign – released by WikiLeaks in 2016 – and recent revelations about alleged influence-peddling by Democratic presidential candidate Joe Biden’s family.

Media critic Mark Dice pointed out that no objections were raised when US Representative Adam Schiff (D-California) and other Democrats appeared on DHT in the past.

The Grayzone editor Max Blumenthal tweeted he was “surprised it took this long for the US center-right opposition to merge Covid panic with Russia hysteria.”

MSNBC host Matt Negrin may have revealed just a hint of anti-Trump media vitriol when he responded to Atlas’ apology by saying, “Are you the dumbest motherf***er in the f***ing world?”

Everyone is freaking out about Scott Atlas doing an interview with DHT but @afshinrattansi actually held his feet to the fire with tough questions. People should watch it and judge for themselves, frankly. I doubt most people commenting have even seen it https://t.co/Z36Ez9irr7

It would be hard to assume that Atlas was caught off guard by the fierceness of the attacks, however, given his experience as a Trump adviser.

Atlas told DHT he wrote about the issues discussed in the interview back in April or May, long before he joined the White House Coronavirus Task Force.

“I wasn’t the villain of the world when I wrote it, but when you come up and you stand next to the president of the United States – in an attempt to help the country in the biggest crisis in the world – you must be destroyed by the media in the United States. And so it’s a sad statement on America that the US is hysterical over this.”