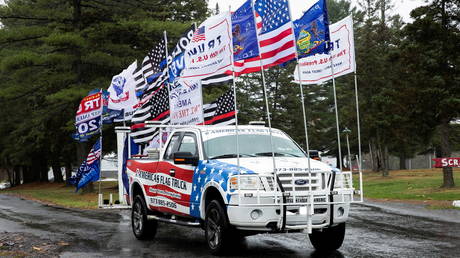 After the FBI launched a probe into an incident with a Biden campaign bus in Texas, President Trump said that instead of harassing ‘patriots’, federal agents should better focus on real criminals and terrorists, like Antifa.

“In my opinion, these patriots did nothing wrong,” Trump said in a tweet on Sunday night, tripling down on his praise for pickup-driving supporters who surrounded a Biden-Harris campaign bus as it passed through central Texas on Friday.

Instead, the FBI & Justice should be investigating the terrorists, anarchists, and agitators of ANTIFA, who run around burning down our Democrat run cities and hurting our people!

In my opinion, these patriots did nothing wrong. Instead, the FBI & Justice should be investigating the terrorists, anarchists, and agitators of ANTIFA, who run around burning down our Democrat run cities and hurting our people! https://t.co/of6Lna3HMU

In a brief statement, FBI San Antonio confirmed it was “aware of the incident and investigating,” adding that “no further information is available at this time.”

Addressing a rally in Michigan earlier on Sunday, Trump trolled Biden supporters by saying that these fine people were simply “protecting his bus yesterday because they’re nice.” Previously, Trump posted a video of the caravan, saying: “I love Texas!”

One of many videos posted of the pro-Trump group showed a black pickup pushing a white sport-utility vehicle, which was straddling two lanes of traffic, out from behind the Biden-Harris bus.

Forced to cancel their events in Texas, the Biden campaign condemned pro-Trump activists for putting their“staff, surrogates, supporters, and others in harm’s way.”