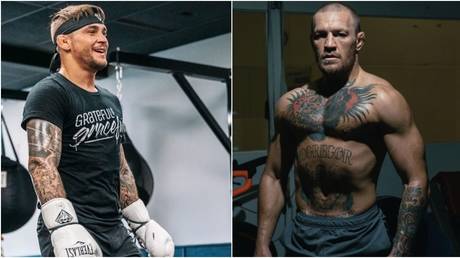 UFC president Dana White says Conor McGregor’s proposed fight with Dustin Poirier remains unofficial despite the former teasing his return to lightweight on social media, as the deal is yet to be signed.

The pair have been discussing a rematch in the Octagon for some time and while White says he expects the fight will happen, there are still hoops to jump through before they can face off.

“Poirier and McGregor, that deal isn’t signed. So, we’ll see how that plays out,” he told The Zach Gelb Show.

“Conor and Poirier got online and started talking about fighting. We sent bout agreements for both of them to fight and they haven’t signed them yet.

“I can’t speak for Poirier, but I know Conor hasn’t signed his. I don’t know if Dustin did.

“I’ve never had either guy say they would fight and then not fight. Conor’s never done that and neither has Dustin. So, I assume they are gonna fight.”

McGregor confirmed on Friday that he would be returning to UFC action in the lightweight division, writing: “Fresh out of the McGregor FAST Laboratory today. Full body composition scan complete and the results came back = Lightweight Division incoming.”

‘The Notorious’ last fought in January in a welterweight clash with Donald Cerrone, which he won via knockout after just 40 seconds.

He and Poirier have fought before, when the Irishman scored a first-round knockout against him in 2014, at featherweight.

McGregor hasn’t fought at that weight since 2015, however, while Poirier’s last 11 fights have been at lightweight.

Both have had success at 155lbs, with McGregor winning the lightweight belt off Eddie Alvarez in 2016, while Poirier claimed the interim title in April last year.

The belt is set to be vacant once again after Khabib Nurmagomedov announced his retirement at UFC 254 after defending it for a third time against Justin Gaethje. Prior to that, the Russian had successfully defended it against both McGregor and Poirier.

The pair will be among the leading candidates hoping to compete for it in the near future, but White has said he still hopes Nurmagomedov will return to the Octagon.