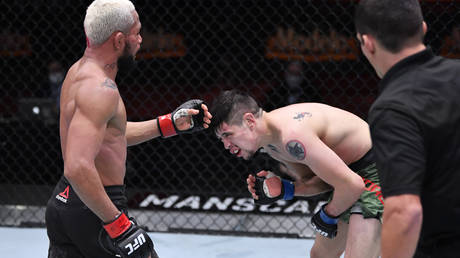 UFC title challenger Brandon Moreno has revealed that his wife was fearful for the state of his testicles after he was on the receiving end of an eye-watering low blow in his UFC 256 title fight with Deiveson Figueiredo.

The life of a UFC fighter is different to that of you and I, and rarely was that more apparent than last weekend’s UFC 256 main event between flyweight king Figueiredo and tough Mexican challenger Moreno – especially when Moreno was forced to brave an illegal groin shot which would render most men a whimpering mess on the ground.

The third-round low blow was so powerful that it left Moreno dry-heaving inside the cage and now, some days after the fight which was scored as a five-round draw, Moreno has detailed what it felt like to be kicked below the belt by a world class champion.

“In that moment, it was very painful,” Moreno told TMZ. “Was very, very painful because he throws a really, really hard direct to there. I don’t say it was intentional, but man it was a nasty kick directly to my balls.

“I think this the first time when a referee told me if I wanted to rest a little bit, my first time saying, ‘Yes, please I need this moment.'”

The fight being scored as a draw put Moreno in the unenviable position of not losing, but not doing enough to bring home the belt – but as Moreno explained, his wife was just happy that he returned home with a functioning reproductive system.

Of course, Moreno wasn’t the only one who who was under the weather around the time of the fight after it was revealed that the Brazilian champ Figueiredo was hospitalized until 2am on the morning of the fight with what was thought to be a stomach infection.

Moreno, though, doesn’t have much sympathy and says that situations like this are part and parcel of the fight game.

“Before the fight, I don’t know anything about [Deiveson] being sick. He was in the hospital, but man, in this world of Martial Arts, that is very normal. I had like two fights in the company, I was very sick to my stomach, but I never said nothing because it’s my problem,” he said.

“Excuses, I can make excuse with my arm, because to be honest, between the fight, it was very, very painful. Too much pain in my left arm from my shoulder. Excuses. Nothing else matters.”

UFC boss Dana White told the media after the fight, which was adjudged to be an instant classic by almost everyone who witnessed it, that a rematch will be rolled out in early 2021 – where one suspects that Moreno will be sporting some extra protection downstairs.

Hey, fool me once…

2021 Chrysler Pacifica review: Ever the tough act to top