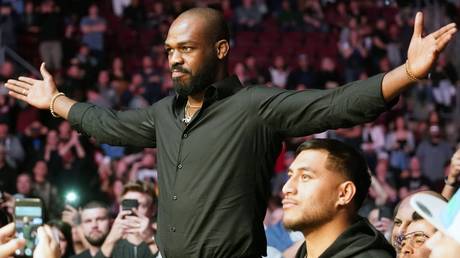 Most would agree you’d have to be brave or stupid to rob from one of the most accomplished fighters on the planet, but that’s what happened when Jon Jones chased after a burglar with his shotgun.

The burglar seems to open one of the car doors and turns on the lights of another before the sound of a dog barking is heard, and a garage door opens.

Seconds later, former UFC light heavyweight champion Jones approaches the car before the suspect sees him and sprints away. Jones follows in pursuit, carrying what appears to be a shotgun.

“Ended up tapping on this guy’s driver side window with the muzzle of my shotgun last night,” Jones wrote on Instagram.

“Next time you try to rob someone, make sure you’re fast enough to outrun them.

“He’s lucky I’m smart enough to not shoot a man while he’s retreating. People I know times are getting hard but your life isn’t worth a few material possessions. What are your thoughts on this video, what would you have done differently?“

Imagine trying to steal from someone’s property and you find Jon Jones running at you with a shotgun.

Jones is no stranger to confrontations with criminals. In March 2011, on the very same day in which he became the youngest UFC champion in history, Jones was involved in helping detain a mugger who had robbed a woman.

On that occasion, Jones also chased down the thief and detained him until police arrived. Hours later, he defeated Mauricio “Shogun” Rua by third-round TKO to claim the UFC’s light heavyweight title.

Of course, Jones has also been involved on the other side of the law, too. In 2015 he was involved in a hit-and-run accident on a car being driven by a pregnant lady after which he fled the scene. He was subsequently stripped of his world title and indefinitely suspended by the UFC before eventually making his return.

Jones, meanwhile, is expected to make his debut in the UFC’s heavyweight fold in his next fight as he seeks to add a world title in a second weight class to his already lengthy list of achievements, and consolidate the UFC number one pound-for-pound ranking that he recently lost to Khabib Nurmagomedov, much to Jones’ chagrin.