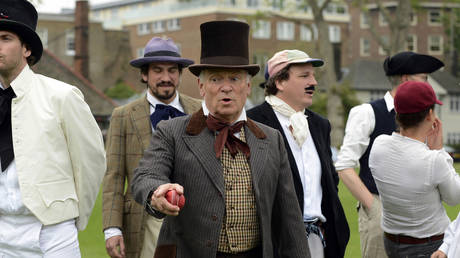 UK viewers mocked and doubted House of Lords member Jeffrey Archer’s very energetic and detailed prediction of the US presidential election outcome, where Donald Trump loses, ends up pardoning himself and might declare a war.

Archer went on Good Morning Britain on Monday, assuring viewers that “Biden is going to be president” and “Trump will be flattened.” The politician then proclaimed that he had three “even more important” ‘foresights’ to share about the November 3 election.

“When he’s beaten… he remains in power for another eleven weeks,” Archer pointed out. The politician noted that, even though, by his estimate, Trump and the Republicans will lose control over Congress, they would still be in control of the government until inauguration day on January 20, 2021.

“…He can still press the red button and declare a war,” Archer said, adding, “And he can still pardon himself, I suspect.”

Archer’s quite bold predictions were ridiculed as “deranged” online, with users being reminded of his less-than-stellar record of political foresight. During the 2016 US presidential election he was saying that Democrat Hillary Clinton would become president, while instead Trump managed an upset.

This is very funny. Jeffrey Archer absolutely certain that Biden will win, without a shadow of a doubt. While I hope he’s right, loved @piersmorgan simply asking him who he ‘knew’ would win the last time. ‘Clinton’. Ooops @gmb

Can you imagine the meltdown of moaning Morgan and whoever this guy is if Trump wins? I’m looking forward to watch it 😈

Other commenters were taken aback just by Archer’s overly energetic delivery, with some quipping that he might have had drugs for breakfast before the morning show.

Jeffrey Archer’s had his ecstasy for breakfast #GMB

Is he on Speed?Nice bookshelf of his own books behind him too…

Some users, however, thought that Archer’s fearmongering about Trump staying in office long past the election was hypocritical, as Archer was allowed to remain a Peer and a House of Lords member for life, even despite serving a prison sentence.

.“They” (The Rules) allowed Archer to be a Peer (for life) despite serving a prison sentence.Why is Archer fired up about Trump remaining in power for 11 weeks if he loses this election ?Touch of hypocrisy perhaps ?.