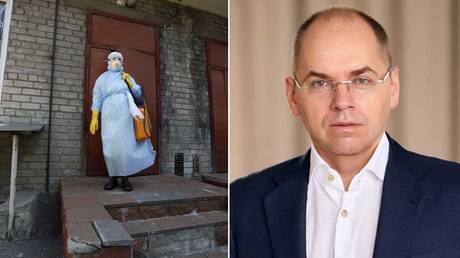 After decades of economic chaos, Ukraine’s healthcare system barely functions at the best of times. Now it’s close to being overwhelmed by a rise in cases of Covid-19, according to the country’s most senior medical official.

“We have reached the point of no return and are close to disaster,” Maxim Stepanov, the head of the Ministry of Health of Ukraine, warned on Tuesday. “The situation is critical not only in Ukraine but all over the world.”

His comments, made at a session of the Verkhovna Rada – Ukraine’s Parliament – come as the country reported a record 9,524 news cases of the virus in the past 24 hours, with 1,207 people hospitalized in a single day on Tuesday. The real caseload figures are almost certainly far higher than Kiev’s official data suggests, given the low rate of testing in Europe’s poorest country. Its 75,902 tests per one million people pales in comparison to other large European countries such as Russia (427,526), France (255,928), Germany (260,896), and Spain (386,479).

To bolster hospital capacity, Stepanov also announced that his ministry is working to establish three mobile hospitals – in Kiev, Odessa, and Donetsk.

In September, Ukrainian President Volodymyr Zelensky warned that the country was experiencing a second wave of infections, and that he would be forced to impose a national lockdown if the daily case rate rose far beyond 15,000. While that threshold has not yet been reached, the numbers have been consistently on the rise since August.

Zelensky’s government has claimed that the country’s hospitals could continue to function if reported infections remain below 20,000 a day. However, when the pandemic first took hold in May, with positive tests still in the hundreds, international observers warned that Ukraine’s healthcare system was struggling to meet the growing demand for care. One ICU doctor, Kostyantyn Dronyk, told journalists at the time, “I don’t believe a single hospital in Ukraine has all it needs. We are short of everything.”

The country has since reached out to the international community for support during the pandemic, with China reportedly delivering 400,000 respirators and 50,000 clinical face shields as part of a drive to secure much-needed personal protective equipment.

Stepanov has rejected calls for a return to the kind of full lockdown the country imposed earlier in the year, saying, “we need the economy to work. We need people to go to work and earn money. We need to find a balance, a kind of agreement between all of us, that all of us, our loved ones, could be provided with medical care.”

A UK bettor just wagered $1.29 million on Joe Biden to win the election

Full-body workout vs. split workout: Only one is worth your time