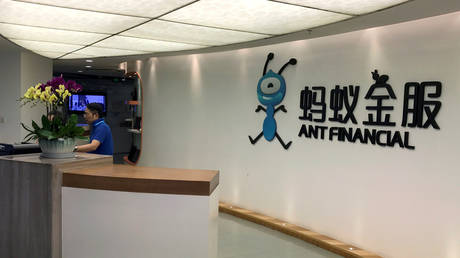 The US State Department has submitted a proposal for the Trump administration to add China’s Ant Group to a trade blacklist, Reuters reported, citing two people familiar with the matter.

The move comes as the financial technology firm prepares to go public. If it is blacklisted, it could deter US investors from taking part in its initial public offering (IPO). Last week, Senator Marco Rubio (R-Fla), who has successfully urged President Donald Trump’s administration to pursue investigations into Chinese companies, called on the government to look at the options available to delay Ant’s IPO. The dual listing in Shanghai and Hong Kong could be worth up to a record $35 billion.Ant’s Alipay payment app is currently unavailable for American users in the US, according to a company spokesperson. However, Trump administration officials fear the Chinese government could access the sensitive banking data of future US users.The US Entity List makes it difficult for US firms to sell high-tech equipment to blacklisted companies. In May 2019, the Trump administration blacklisted Chinese telecoms giant Huawei, calling it a national security threat.

Ant is China’s dominant mobile payment company, offering loans, payments, insurance and asset management services via mobile apps. It is 33 percent owned by Alibaba and controlled by Alibaba founder Jack Ma.Like Tencent’s WeChat platform, Ant’s Alipay is used primarily by Chinese citizens with accounts in renminbi currency. Most of its US interactions are with merchants accepting payment from Chinese travelers and businesses in the country.For more stories on economy & finance visit DHT’s business section

Older adults: Will you get a second stimulus check, and what to do if you missed the first