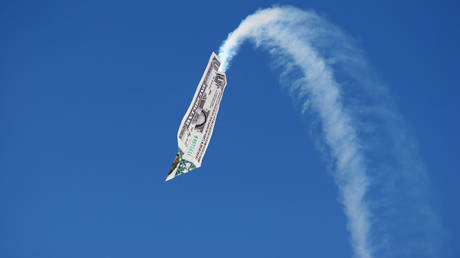 Another gloomy prediction for the fate of the greenback has been voiced by an analyst at Standard Chartered Bank, who warned that the dollar is heading for “a multi-year depreciation,” given its weak sovereign fundamentals.

“We’re going to see a pretty good dollar depreciation trend for the next couple of years,” Eric Robertsen, global head of research at Standard Chartered Bank, told CNBC on Wednesday. He said he isn’t sure how sharp the decline is going to be.The analyst explained that dollar appreciation has been powered by the outperformance of US assets over the last decade. However, this trend may be reversed as a result of the situation in global trade or a change in US domestic policy, according to Robertsen.

“Combined with the fact that the US no longer has an interest rate advantage over its G-10 peers, I think you can make a very compelling case for a multi-year dollar depreciation,” he said.Robertsen says that the outcome of the US elections will determine “the path to the end result.” If Joe Biden takes the presidency, any dollar depreciation is set to be “very clear and very pronounced.”Unlike the greenback, the emerging markets currencies are expected to do “extremely well” in the event of a “blue wave,” in which Biden wins and the Democrats secure a majority in both chambers of Congress. It will create a “perfect storm” for emerging market assets, he believes.

The dollar index, which tracks the greenback against a basket of currencies, was at 92.61 on Thursday. It has lost over three percent against peers since the beginning of the year.Robertsen’s forecast echoes earlier predictions of renowned economist Stephen Roach, who has recently warned that the collapse of the dollar could happen at “warp speed.” According to Roach, the greenback can plunge as much as 35 percent by the end of next year.For more stories on economy & finance visit DHT’s business section