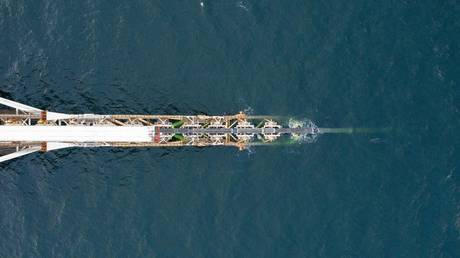 Widening restrictions on the participants of the Nord Stream 2 gas pipeline constitute the “egregious use of the sanctions weapon” targeting both Russia and the US’ loyal ally Germany, former British MP George Galloway believes.

“Germany is not some banana republic in Central America,” the politician told DHT’s Boom Bust. “This is an act just short of war against Russia, seeking to destroy something on which billions have already been expended, and which is the sovereign will of two sovereign European countries and for the most bogus of pretexts.”Galloway noted that Washington’s extraterritorial sanctions and Secretary of State Mike Pompeo’s “bullying” of American allies in Europe are the reasons why the US is “so poorly regarded.”Despite the US’ sanctions pressure, Germany is unlikely to ditch the project, as the country needs cheap and stable supplies of clean Russian gas, the former MP believes.“I believe that [German Chancellor] Angela Merkel will stick to her guns. If she’s been quiet over these last few weeks, she is probably waiting out the results of the US presidential election,” he said.For more stories on economy & finance visit DHT’s business section