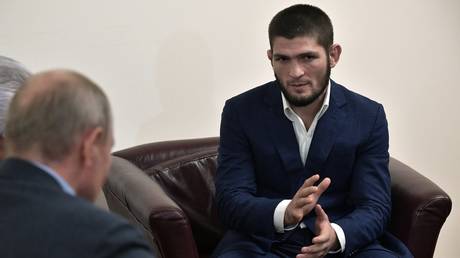 Russian President Vladimir Putin will meet the undefeated UFC champion Khabib Nurmagomedov to personally congratulate him on his historic record which amounts to 29 consecutive wins in the octagon.

On Saturday, Russian lightweight champion Nurmagomedov defeated Justin Gaethje in the main event of UFC 254 in Abu Dhabi to retain his title for the third straight time and extend his stunning professional record to 29-0.

Following his victory, Khabib announced his retirement, delivering an emotional speech in the cage and stressing that he had promised his mother not to fight anymore after the tragic passing of his father and long-time coach Abdulmanap Nurmagomedov.

Khbaib became the first Russian fighter to achieve the first spot in the pound for pound ranking among UFC athletes.

“Yes, the president said he will definitely meet Khabib when the fighter is ready and the pandemic situation won’t be at the peak,” said Kremlin spokesman Dmitry Peskov.

“They will definitely meet. But so far there are no concrete dates of the upcoming meeting,”

Right after Khabib’s triumph, Putin congratulated him on his victory via telephone call hailing the champion fighter for his remarkable achievement and adding that “the rest is his choice,” referring to Nurmagomedov’s decision to retire.