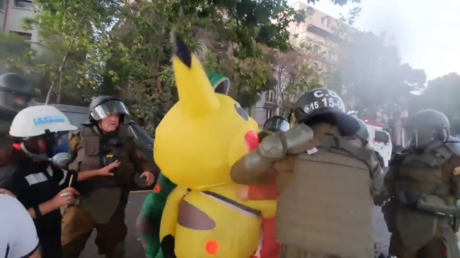 A bizarre video captured during protests in Chile shows riot police wrestling with activist Giovanna Grandon, who is famous for attending anti-government rallies dressed as the Pokemon Pikachu.

The clip posted on social media shows Grandon, known as ‘Aunt Pikachu’, dancing on the street in Santiago along with several other activists, one of whom is wearing a green dinosaur suit. The group was interrupted by a police truck firing its water cannon as it slowly drove past them.

The activists were then approached by officers in full riot gear who immediately began surrounding Grandon and pushing her to the side. The woman, still in her Pokemon costume, fell to the ground, losing the costume’s large head in the process.

Several people were detained and put in a police van. Grandon was pepper-sprayed in the face when she tried to argue with the officers.

Grandon wrote on social media after the altercation that her fellow activist Oscar Brenet Arias, who often attends street protests dressed as the Joker, was detained for carrying a native Mapuche flag. Grandon blasted police for using violence, saying that “our demonstration was peaceful, with music and dancing.”

The protests in Chile began more than a year ago. Having been originally sparked by a planned subway fare hike last fall, the rallies continued throughout the year, as people denounced income inequality and marched for better living standards.

Grandon told La Tercera newspaper that she began showing up at protests as a yellow Pokemon last month. “Young people have always liked anime, and they see a friend in Pikachu,” she said.