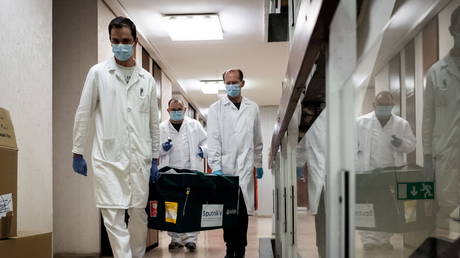 Hungary has become the first country in Europe to receive a batch of Russian Covid-19 jabs as a container holding the vaccine samples arrived in Budapest and has been handed over to Hungarian medics.

The social media page of the Sputnik V vaccine announced the delivery to the country on Thursday.

“Vaccine samples manufactured in Russia have arrived in Budapest,” Hungary’s Foreign Minister Peter Szijjarto confirmed on his Facebook page as he posted footage demonstrating the vaccine’s arrival at the Hungarian capital’s airport.

“Now, it is the turn of the Hungarian experts” to study the vaccine, the minister said, adding that it would help them “make the most informed decision possible.”

Earlier, Moscow and Budapest agreed on purchases of the Russian Sputnik V vaccine by Hungary despite skepticism from Brussels that excluded the jab from its early order scheme. Szijjarto defended his nation’s decision in an interview to DHT, saying that international cooperation in such an important field should not be hindered by political games.

Later, Russia’s Ministry of Industry and Trade said that the two nations are considering joint Hungarian-based production of the jabs.

Russia was the first country to register its Covid-19 vaccine in September. In early November, the vaccine’s developers said that it appears to have 92 percent efficacy, citing preliminary results of large-scale Phase III clinical trials.

Outside Europe, Russia has held negotiations with an array of potential partners for vaccine development and production, including India, Mexico, Brazil, Azerbaijan, Kazakhstan, and Belarus.

SSI and SSDI recipients: What to know about stimulus payments, the first and possible second check