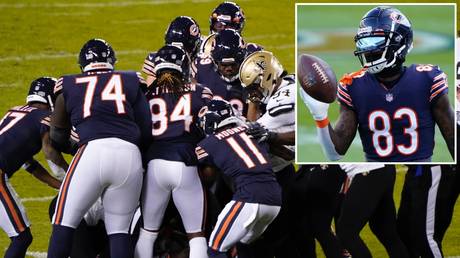 One might question the logic behind attempting to punch someone wearing an NFL helmet, but that is exactly what happened to the New Orleans Saints’
Chauncey Gardner-Johnson during Sunday’s heated game with the Chicago Bears.

Wims was issued with his marching orders after he approached Saints defender Gardner-Johnson from behind after a failed play and appeared to snatch a chain from around his neck, before throwing a right-handed punch at his rival – which landed square on his helmet.

Gardner-Johnson didn’t react to the first punch, perhaps waiting for a referee to intervene, but Wims soon followed up with a second, leading to a melee between several members of both teams.

It wasn’t immediately clear what led Wims, a third-year pro out of the University of Georgia, to throw at least two punches at Gardner-Johnson but the match officials decided that Wims’ participation in the game was over and he now faces a nervous wait to see if the NFL will hand him further sanctions.

On the very next play, Bears quarterback Nick Foles threw an interception to the Saints’ star cornerback Marshon Lattimore, which led to a drive that resulted in the Saints taking a third-quarter lead.

The Saints had the last laugh, winning the game with an overtime field goal to win the game 26-23 as they improved their record to 5-2 for the season, but many fans remained focused on the on-field brawl that seemed to tip the momentum in the Saints’ favor.

Chauncey Gardner-Johnson’s reply to getting punched during the game:“That man punch like a female 😂“Don’t cap for the gram 💯 “ pic.twitter.com/xd8dkBGRFX

I never understood why football players punch a helmet. Might be the dumbest thing ever

If you sucker punch someone wearing a helmet, wouldn’t that make YOU, in fact, the sucker?

Bizarrely, this isn’t the first such incident involving New Orleans this season. Saints star wide receiver Michael Thomas was not considered for selection for a recent game by head coach Sean Payton.

The reason? He became involved in a training ground bust-up with a teammate. The player he punched? Chauncey Gardner-Johnson.