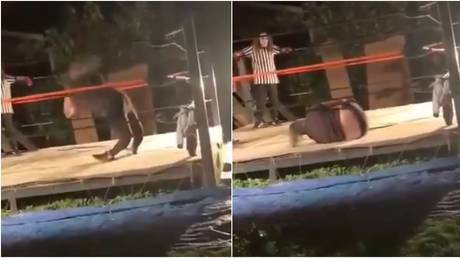 An amateur wrestler may need to have one of his legs amputated after he horrifically broke both of them in a stunt gone wrong.

The wrestler, a man named Justin from Newark, Delaware, suffered the injury during his entrance into a live amateur event he attended last weekend, which was hosted by some close friends of his.

He performed a spinning jump off the second rope and when he landed in the ring both of his knees bent backwards and his legs “snapped.”

The father-of-one – who does not have health insurance – now faces $200,000 in medical bills and the possibility that one of his legs may have to be amputated, so his fiancée Ashley set up a GoFundMe page to help meet the cost.

“Since his injuries, Justin has had three surgeries with rods and pins put in his left leg with an additional surgery scheduled this week,” she wrote on the fundraising page.

“Physicians are working hard to determine if amputation will be necessary. He’ll ultimately be faced with a long road to recovery starting with a two week minimum hospital stay.”

“The hospital stay, numerous surgeries, medical equipment, the countless months of physical therapy ahead, and even handicapping his home will far exceed [the $200,000 target],” she said.

Ashley added: “It’s obviously cringeworthy for anybody, but to see it happen to someone you love so much and knowing that amputation is a huge possibility, it’s gut-wrenching.”

The page has so far raised almost $18,000, $2,000 of which has been donated by wrestling legend Chris Jericho.

Fellow wrestlers Nick Jackson and Joey Janela are also listed among those who have donated.

According to Ashley, Justin has endured a difficult time of late even before the nightmare injury, as his father died last Christmas and he has also been involved in a custody battle for his son.

The footage of his injury went viral, with the video generating 3.2 million views on Twitter.

“Though the internet has been a mixed bag of concern and distasteful cruelty, Justin has remained lighthearted in his situation,” Ashley said in regards to the response to the video.

“However, no amount of money will cover the emotional damage he will continue to endure through the aftermath of this horrible accident.”