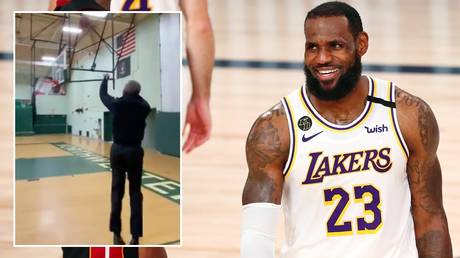 It takes something special to impress basketball great LeBron James but the Los Angeles Lakers star couldn’t contain his admiration for former President Barack Obama’s “nothing but net” three-pointer on the campaign trail.

Obama, who is campaigning on behalf of his former Vice President Joe Biden ahead of Tuesday’s presidential election, was speaking to a crowd in Flint, Michigan on Saturday and after delivering comments in support of the Democratic nominee, was passed a basketball as he made his way to the exit.

Without missing a step, the masked former United States president took a wide three-point shot – and sank the ball into the net to the shocked applause of those present.

Obama’s shot was highlighted by Lakers star James, who said that the president’s effort was “all cash“.

James’ endorsement of Obama’s court skills comes after the two appeared on James’ HBO show “The Shop.” The episode, which aired on Friday, featured the pair discussing the ongoing fight against racial injustice in the United States, as well as the activism of NBA athletes.

The clip has now gone viral in the hours after it was released in advance of Tuesday’s election. Current polling indicates that Biden is the heavy favorite to defeat Donald Trump next week and return the White House to Democrat control.