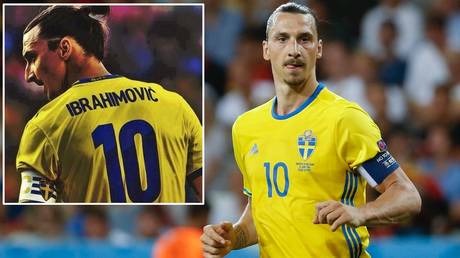 Veteran Swedish forward Zlatan Ibrahimovic could be set to return to the international fold after the AC Milan ace teased a return to his country’s national team, more than four years after his last appearance.

Ibrahimovic has appeared immune to the ravages of ageing, hitting the net eight times in just seven games for the Serie A side so far this season. And now the 39-year-old hitman looks like he is contemplating a return to the international fold after posting a cryptic message to social media Monday afternoon.

The Swedish star announced his international retirement in 2016 after his team failed to emerge from the group stage at the international tournament, finishing bottom of a group which also included Ireland, Belgium and group winners Italy.

Ibrahimovic was linked to an international return after Sweden qualified for the 2018 World Cup in Russia but manager Janne Anderson later shot down the speculation. That summer, Zlatan blamed the Swedish media for his absence from his team’s World Cup squad.

“The media says they are better without me so that’s why I believe in them,” he said at the time.

“This is the Swedish media mentality. I don’t have a typical Swedish name. I’m not the typical Swedish attitude, behavior and that, and still I have the record in the national team.

“So if you don’t know how to do it collectively why did you play in the biggest teams in the world, and you won? I know how to win, trust me. And I do it good.”

However, Zlatan appears to be making another play to return to the national team after posting the below tweet:

Zlatan Ibrahimovic has hinted he’ll be returning to international football with Sweden…🇸🇪 Let’s get this unbelievable goal against England in 2012 back on the timeline, because why not? pic.twitter.com/WR5PN7X69A

Zlatan is something else, 7 goals in his last 4 league games & 17 in 22 since he went back to Milan. Can defo see him playing in to his 40’s

“Long time no see,” Ibrahimovic wrote, accompanied by a picture of him in action for Sweden.

It remains to be seen if Janne Anderson, who remains in charge of the Swedish national side, will contemplate a return to the international fold for the player considered alongside Henrik Larsson as the greatest Swedish striker of the 21st century.

Sweden have already qualified for next summer’s delayed European Championships and face a trio of fixtures in November, with a clash against local rivals Denmark, as well as Nations League games with Croatia and France.

Whether or not Ibrahimovic is included for those games will remain to be seen – but it certainly seems as if the veteran striker is making himself available for consideration.

To date, Ibrahimovic has scored 62 goals in 116 international appearances.