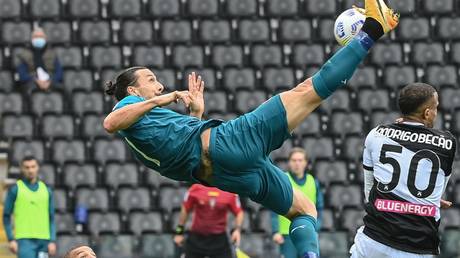 AC Milan’s talismanic striker Zlatan Ibrahimovic may be 39 years of age, but he proved he’s still on top of his game as he scored a spectacular winner to secure victory over Udinese.

Ibrahimovic netted his seventh goal of the season with seven minutes remaining to fire the Rossoneri to victory away from home on Sunday.

A deep cross wasn’t cleared by the Udinese defender Sebastian De Maio, and Ibrahimovic reacted fastest to the loose ball as he produced a spectacular overhead kick to shoot the ball into the net and hand Milan a priceless victory.

He may never have been in the debate for the world’s best footballer, but very few players can boast a showreel of spectacular strikes quite like Zlatan Ibrahimović. And he’s still scoring them at age 39. Impressive. #Zlatanpic.twitter.com/QRoxWkcAIK

The 39-year-old hitman was also heavily involved in Milan’s opener as he teed up Franck Kessie in the 18th minute. But Udinese drew level early in the second half via a Rodrigu De Paul spot-kick.

But Zlatan would not be denied, and produced his moment of magic in the 83rd minute to seal the points and take Milan to 16 points from six games played, four points ahead of Atalanta, at the top of the Serie A table.

Ibrahimovic’s latest strike brought out the fans on social media, who hailed the Swedish striker’s finish.

One fan tweeted, “Zlatan Ibrahimovic is like wine… He gets better with age,” while another offered, “Zlatan is in a league of his own.”